Feria Internacional del Aire y del Espacio (International Air and Space Fair) or FIDAE, is a biannual international airshow held at Comodoro Arturo Merino Benítez International Airport in Santiago, Chile. FIDAE is held at the 10th Aviation Group facilities on the northern end of the airport, often referred to as Base Aérea Pudahuel. The Group operates the transportation and AEW&C roles for the Chilean Air Force (FACH) with aircraft such as the Boeing EB-707 Condor, Boeing KC-135E, Lockheed C-130 Hercules and the presidential transport fleet all stationed at the base.

FIDAE was formed in 1980 as FIDA’80 but was renamed in 1990. Today, the airshow is the biggest in all of Latin America and 2018 celebrated the show’s 20th anniversary. This year’s FIDAE hosted 59 participating countries, 533 exhibiting companies and more than 120,000 attendees across the 6-day event. This included no less than six new exhibiting countries; Belarus, Finland, Indonesia, Paraguay, Portugal and Ukraine.

The twentieth edition of FIDAE was held from 3rd to 8th April, where contingents from five continents in the aerospace, defence and security sectors came to exhibit their latest technological advances. As the event officially opened on Tuesday 3rd April, the first four days were strictly for trade visitors only with the remaining two weekend days being open to the public. The two days prior to the show (1st / 2nd April) are traditionally ‘arrivals’ days for aircraft participation. This year, though, that didn’t seem to ring true, with participating aircraft already being on the ground when I arrived in Chile on 30th March.

The morning of 30th March saw a Chilean Air Force KC-135E Stratotanker arriving from Punta Arenas in the south – having dragged two F-5E Tiger IIIs with it. With a rumoured nine airframes still on strength with the FACH, this could well be the type’s last FIDAE. One F-5E would later join the static display and the other made for a welcome addition to the flying display. The other major arrival to note on this day was the debut of two F-35A Lightning IIs at FIDAE and in Latin America; along with two F-22A Raptors. The aircraft arrived in formation with an F-16 from FACH after a photo shoot with a Chilean Air Force Gulfstream over the Andes. The aircraft were supported by a KC-10A Extender from Travis AFB and a KC-135R Stratotanker from March AFB for the 10hr flight down from Florida.

The afternoon of the 31st saw the Brazilian Embraer KC-390, PT-ZNF, arrive from Sao Paulo for its FIDAE debut . The arrival brought much excitement for the local aviation enthusiasts, giving them a first sight of Embraer’s tactical airlifter.

Shortly after, two C-27J Spartans from the Peruvian Air Force arrived along with two KT-1P Torito (the export version of the South Korean designed KAI KT-1 Woongbi). An example of each would join the flying and static display.

The 1st and 2nd April being the more traditional arrivals days, these were much more fruitful for show movements. The morning of the 1st saw a practice display by the Peruvian C-27J, flown by their own pilots. Whilst not as ‘crazy’ as the traditional display flown by Alenia test pilots, the Peruvians more than held their own with a series of fast passes and manoeuvres which showed off the type’s agility to good effect.

The Chilean Navy (Armada de Chile) arrived shortly after with a Partenavia AP.68TP used for SAR duties along with a Airbus C-295MPA/ASW Persuader, Aerospatiale SA-365F Dauphin 2 and finally, an AS-332F1 Super Puma. All aircraft bar the Persuader (static only) would perform a practice routine ahead of the public days the following weekend.  The AP.68 and Dauphin performed a role demo, where the AP.68 dropped a buoy in front of the crowd and the Dauphin winched down a crew member to collect it; simulating a search and rescue scenario.

Late afternoon saw the arrival for the static display of a single McDonnell Douglas MD-369FF Defender and a pair of Eurocopter AS-532AL Mk-1 Cougars from the Chilean Army (Ejército de Chile) in their stunning camouflage. Shortly after, the Airbus A350-900 arrived directly from Toulouse to join the static and flying display. The aircraft first made its debut at FIDAE in 2016. MSN002 is one of the original five test A350s and is fitted with a two-class cabin totalling 252 seats.

The 2nd April saw all aircraft that still needed to practice their display take to the skies. The Chilean Air Force contingent of F-5, F-16, Halcones and Super Tucano along with the USAF F-22 Raptor and Airbus A350 all displayed. Unfortunately, the Chilean fast jet displays were somewhat distant compared to similar European displays, often with a long time waiting for the next pass. The Raptor was as impressive as ever, with a series of physics-bending manoeuvres squeezing as much vapour out the sky as possible. The late evening saw an Airbus C-295W from the Mexican Air Force arrive, showing an interesting winglet modification, not often seen.

The exhibition halls and static display were finally opened on the 3rd April for trade visitors – the opening day of the show proper. As with all show days throughout the remainder of the week, the flying display was spilt into two halves with a short lunch break in the middle. This allowed enough respite from the hot Chilean sun, and a chance to interact with exhibitors in the various halls.

Shortly before lunch, FIDAE welcomed the much-anticipated arrival of the Esquadrilha da Fumaça (Smoke Squadron) from Brazil – joining the overhead with eight resplendent Embraer EMB-314 Super Tucanos. The squadron took two days to travel to Chile, departing from the Brazilian Air Force Academy in Pirassununga, Sao Paolo State, via Córdoba and Mendoza in Argentina. A C-105 Amazonas (Airbus C-295) of the Jaguar Squadron acted as support.

Just before the flying display resumed, the familiar noise of eight Pratt & Whitney TF33 engines thundered down the runway for a low approach. It was the B-52. Surprisingly, on arrival, the crew of the B-52 were allowed to taxi the aircraft straight into the static park, bringing a deafening noise throughout the air show ground as the Stratofortress manoeuvred into its parking position.

The final arrival of the day came in the form of an Airbus A400M from the Ejército del Aire (Spanish Air Force). After having been rumoured to have turned back to Spain due to technical difficulties, the Atlas was a much-welcomed surprise. The aircraft would continue to be both a flying and static participant for the remainder of the week, even flying a similar wing-over to that normally performed by the Airbus test pilots’ display.

Unlike traditional opening days, the second day of the show was far more profitable for flying participants. The day opened with a surprise arrival of one of only two C-130Bs from the Uruguayan Air Force, arriving to drop off a delegation to the show. This was followed by a Peruvian Air Force Boeing 737-200, unfortunately landing on the far runway.

The flying display began with a very spirited KT-1P display from the Peruvian Air Force – showing the power and agility of the Korean made trainer to good effect. Soon after, the Esquadrilha da Fumaça got airborne with their KC-390 Brazilian counterpart for a series of stunning flypasts over the runway before cutting into their display. The afternoon highlights saw Skip Stewart  displaying the Pitts Special by impressively cutting rope lifted above the runway with the edge of the Special’s wing. The Chilean F-16 and USAF Raptor both displayed towards the end of the day’s flying. After the flying had finished, the delegations from Uruguay with the C-130 and Peru with the stunning 737-200 departed back to their home countries.

For the remainder of FIDAE, the flying display remained the same with no new additions. Both F-35s were placed onto the static display towards the tail end of the week, giving the majority of the Chilean public their first chance to catch a glimpse of the 5th generation fighter.

As with European trade shows, as the week moves along, more and more aircraft leave the static display and return home. This somewhat rang true at FIDAE with the KC-390, A350 and the majority of business jets leaving before the weekend show. In turn, their somewhat premature departures were made up for with the arrival of the Erickson Skycrane on Thursday afternoon. The helicopter immediately went into its display on arrival giving onlookers two chances to see the famous water drop from close range.

Friday 6th was the last trade day and subsequently the last day I attended FIDAE. After a week of wall-to-wall sunshine, the clouds finally appeared. The day was spent by runway 19R at SCL where a Mineral Airways Boeing 737-200 was caught, returning from the northern mines, and a FACH KC-130R.

On Saturday, after some careful planning with Erickson Skycrane, we had arranged an impromptu photoshoot by a lake to the western side of Santiago Airport. The crew used the same lake on their arrival to FIDAE to pick up water for their display. Just before their display on Saturday, true to the plan, the S-64F made a arching pass over the top of our location and proceeded to hover down to the lake below to collect water.

Overall, I immensely enjoyed my first visit to FIDAE and Chile itself. The show offers a rare opportunity to get up close to South American military aircraft with ease. Excellent weather was had for 90% of my time in Chile, and the vast array of mountainside that surrounds both sides of SCL airport make the ideal location for airshow photography.

The only downside would be that the EB-707 Condor stayed hangared all week!

Global Aviation Resource would like to thank Charles Cunliffe.

All photos by the author. 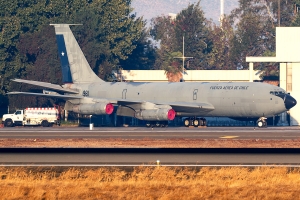