Blessed with fine weather, the 2019 Ten Tors and Jubilee Challenge events held over the northern half of the Dartmoor National Park in Devon over the weekend of May 11-12, was attempted by approximately 2,400 teenagers aged between 14 and 19 years old plus a further 300 teenagers and young adults with disabilities. There may be more challenging out-ward bound events held across the United Kingdom but watching such a large group of teenagers set out alongside their team mates watched by adoring parents and spectators, was truly inspiring. First held in 1960 and each subsequent year over the weekend following the May public holiday, this unique event is firmly established in the south west mindset and especially that of the many hundreds of military personnel and other volunteer groups without whose support this event would be impossible. 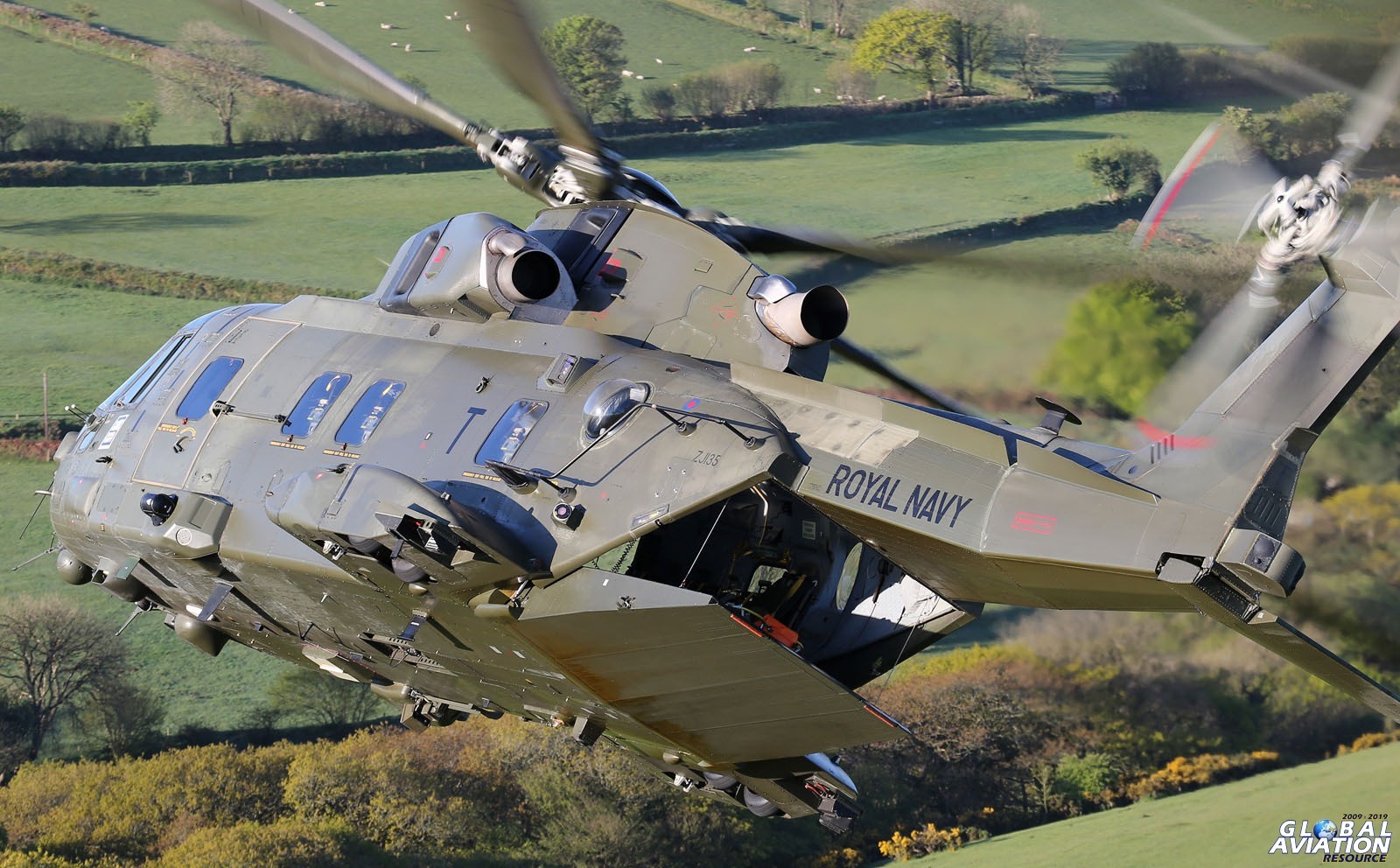 Starting and finishing at Okehampton Camp located on Dartmoor, the Ten Tors event is organised by the Army’s Headquarters South West with support from the Royal Navy and Royal Air Force as well as many other public civilian emergency services and volunteers. These all work closely with the Dartmoor National Park Authority and many landowners to ensure the event runs smoothly and that those participating remain safe and are able to appreciate the best the national park has to offer.

The two-day Ten Tors Challenge event comprises three routes which extend over 35, 45 and 55 miles depending on age. Walking unaided and carrying their own water, food, bedding etcetera over some of the United Kingdom’s toughest terrain, each of the 400 teams is assigned to one of 26 routes during which they must visit a minimum of ten manned safety control and check points in the order provided. They must complete their challenge as a team without any adult support. The Jubilee Challenge takes place much closer to Okehampton Camp and is designed for people aged between 14 and 21 with a range of challenging physical or educational needs. The routes chosen for this challenge are based on individual abilities with individuals or teams supported by cadet officers from the Exeter University Officer Training Corps. 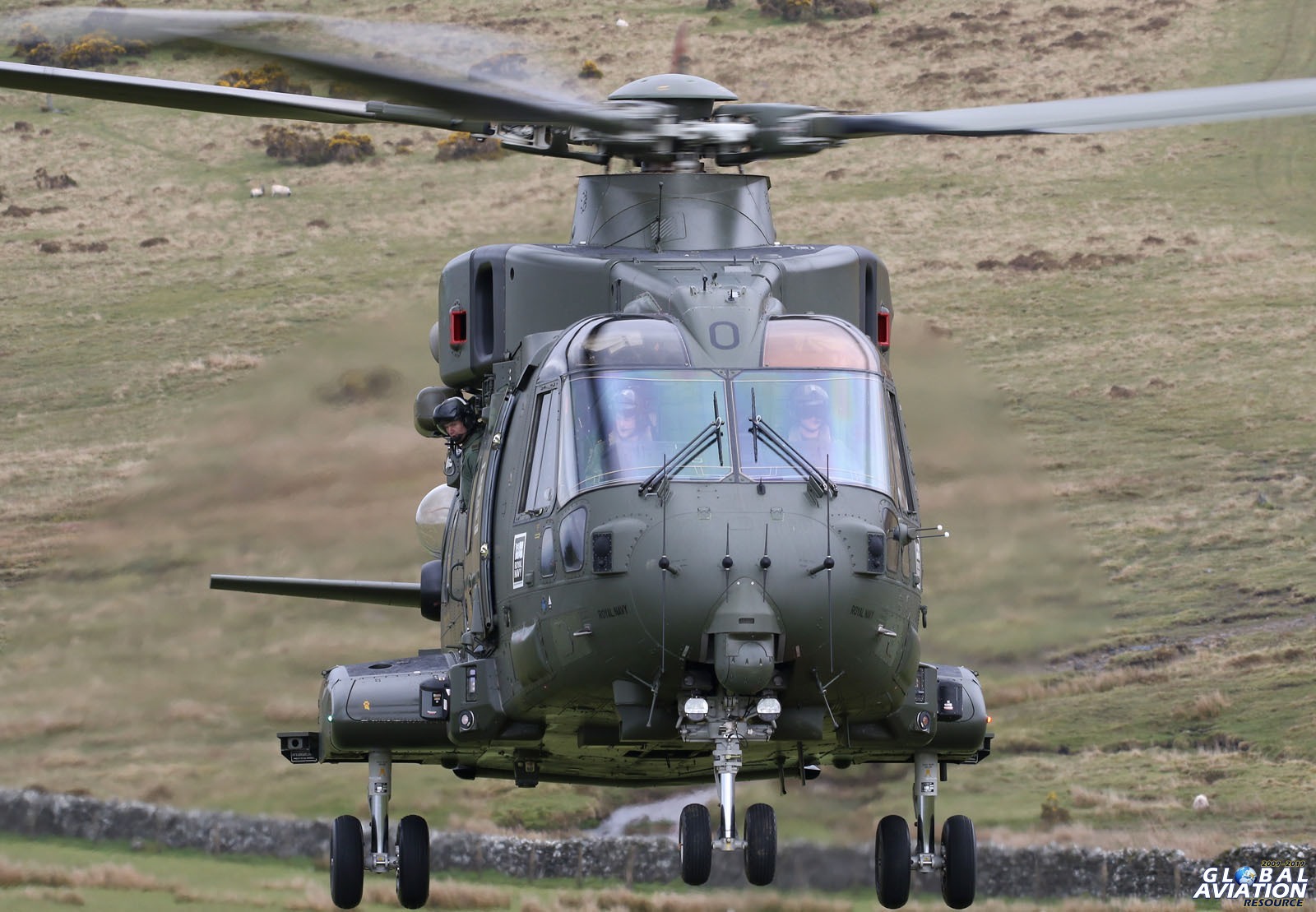 Organised by the British Army with support from the Royal Navy and Royal Air Force, this is the exercise which facilitates the Ten Tors event. With safety the priority, these services work closely with a number of civilian organisations which include the Devon and Exeter Police, Dartmoor Search and Rescue and the British Red Cross.

Casualty evacuation (CASEVAC) is a key feature of this event and as always, it was provided by Royal Navy’s Commando Helicopter Force (CHF) and 846 Naval Air Squadron (NAS) based at Royal Naval Air Station Yeovilton in Somerset who provided two Leonardo Helicopters Merlin HC3s for the duration of the event. In addition to the two helicopters, CHF and 846 NAS provided a large complement to ensure they could provide the 24-hour CASEVAC capability required for the exercise. This complement comprised three full aircrew plus the Detachment Commander, approximately 25 engineers and ground technicians, eight members of CHF Mobile Air Operations Team (MAOT) who manned the Helicopter Landing Strip (HLS) and the co-located Forward Refuelling Point (FRP), plus Royal Navy Reserves (RNR) brought in to man the Ten Tors headquarters and operations centre.

With so much of Dartmoor and the many routes accessible only by helicopter, 846 NAS and the HLS were extremely busy. Global Aviation Resource spoke with Lieutenant Commander Andy White, a senior pilot with 846 NAS and the Ten Tors 2019 Detachment Commander, about the challenges provided by this event:

“This event provides us with a great opportunity to complete some challenging and highly rewarding tasking, and to give something back to the local area as Dartmoor is pretty much in our backyard. For a squadron that is focussed on training future front line aircrew and meeting our other UK commitments, providing this type of support to the community is very rewarding. Talking with teenagers before they went out on Friday and watching them all crossing the finishing line on Sunday was fantastic. Quite a few of the guys at Yeovilton completed Ten Tors when they were teenagers with one of our pilots completing all three distances. He said how much he enjoyed returning and flying during this year’s Ten Tors. He was also able to explain exactly what all the teenagers were going through.” 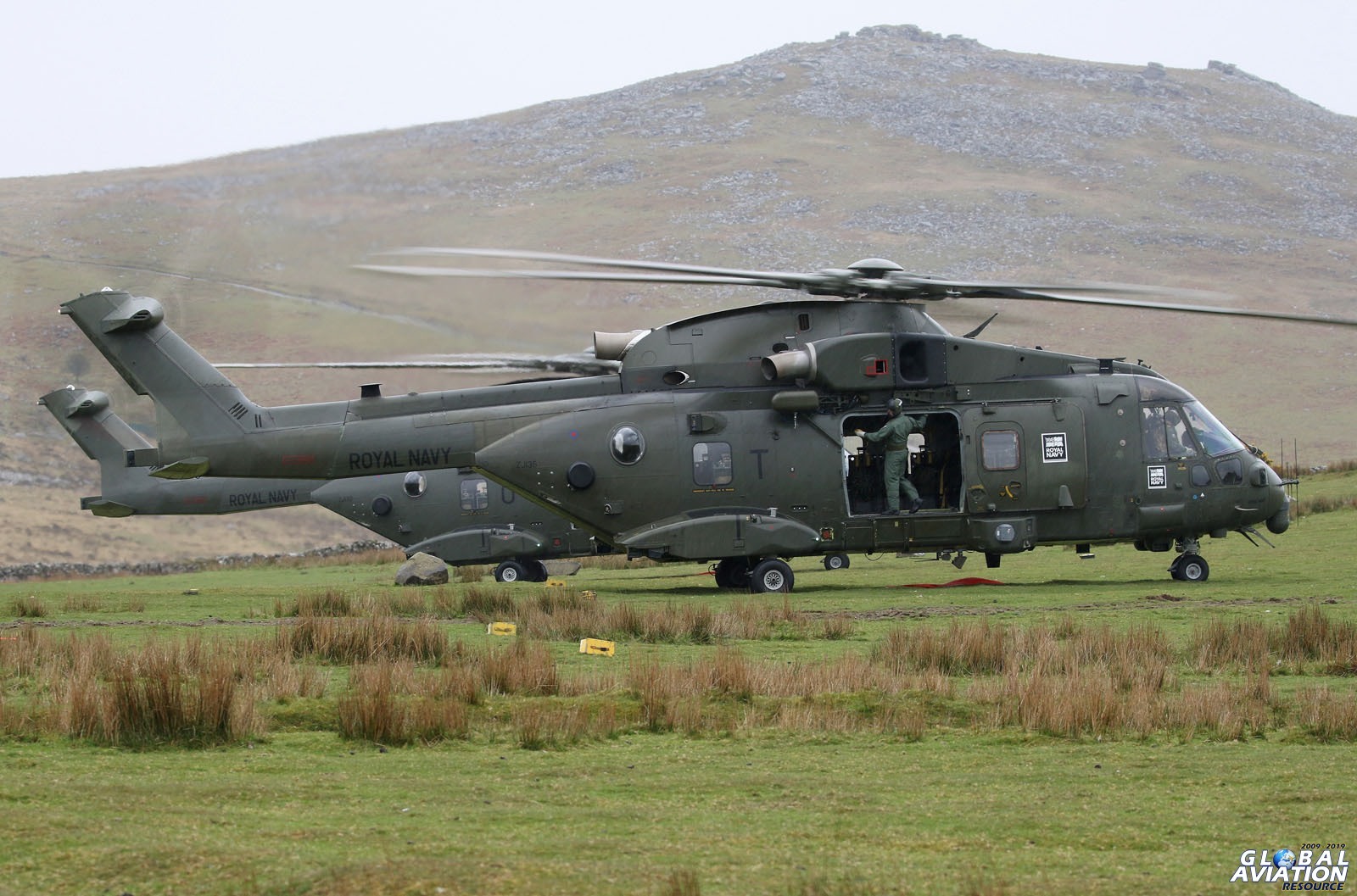 From a training perspective, the Ten Tors Challenge provides CHF and 846 NAS with an outstanding training opportunity as Lt Col White explained:

“A lot of the lessons learned during this tasking are similar to those we use for humanitarian and disaster relief type operations. Having participated in Operation Ruman in 2017 (humanitarian relief provided by the three British military services to the British overseas territories in the Caribbean following Hurricane Irma), one of our crewmen commented that this tasking was very similar to that in the sense that our Ten Tors tasking is reactive, we are providing support to people who need it plus we are moving a mix of civilians, military and civil service personnel with different needs.

“That mix of live tasking coupled with the integration of operations supporting military personnel and competitors in the field, is the type of training we cannot generate ourselves. The event provides us with excellent training.” 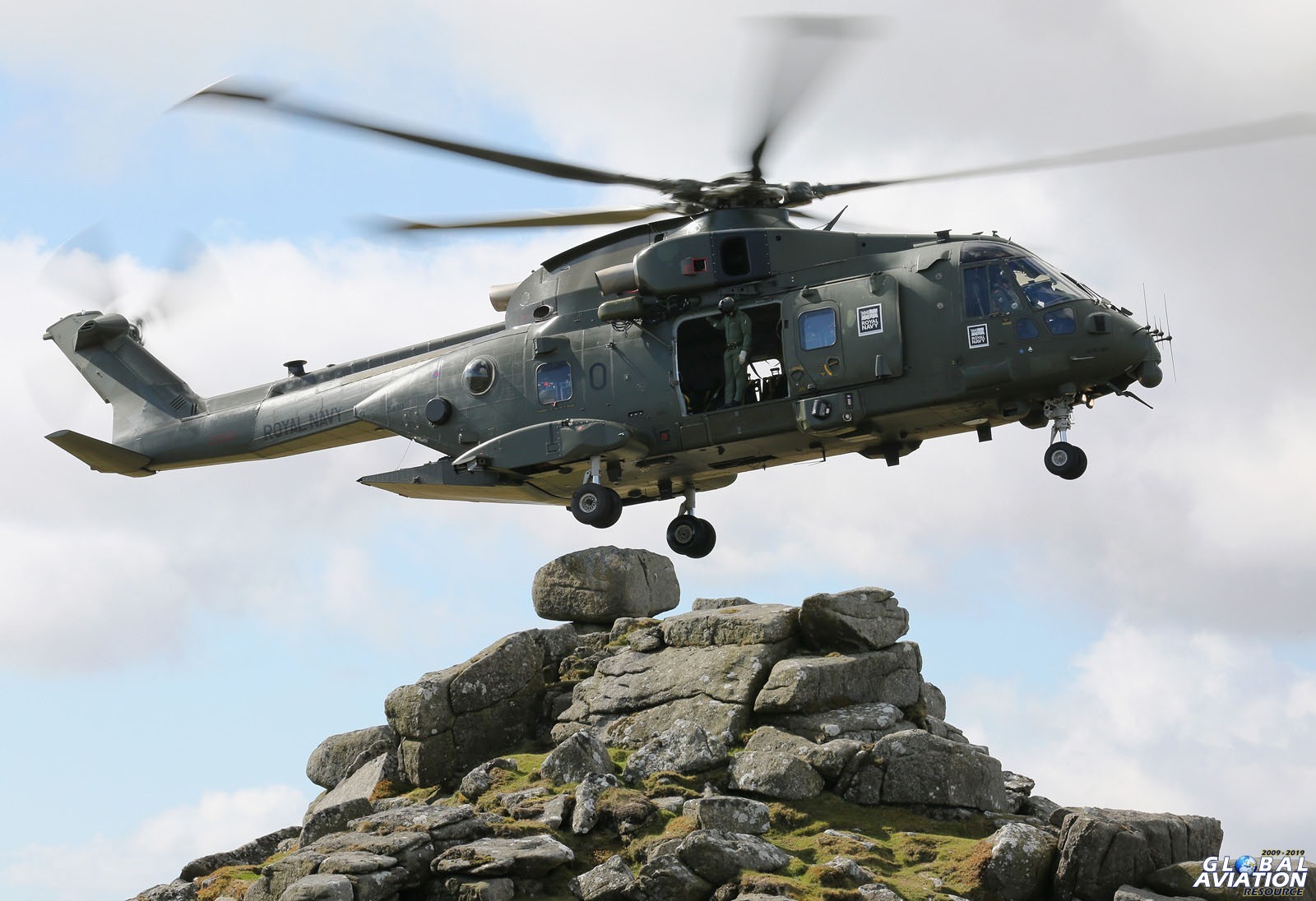 846 NAS were flying practically non-stop from the moment they arrived on Friday May 9 to help set up the event. With much of Dartmoor inaccessible, the Merlin HC3s provided the only transport option available to move the vital check point teams and their equipment into position. Friday complete, the squadron was on station very early on Saturday morning, moving the 105-millimetre starter gun into position and then completing a two-ship Merlin flypast for the competitors as the gun went off for the start at 07:00 hours. It was all systems go from then as Lt Col White confirmed:

“From that moment we were on 30 minutes CASEVAC notice. We completed a number of those missions throughout the day transporting people to Derriford Hospital (located in Plymouth, Devon) or back to the HLS for an ambulance transfer back at Okehampton Camp. Our alert status was maintained throughout the night with crews on station, ready and briefed to go all night and then again on Sunday until everyone was accounted for as either finished or taken off the Moor. During Saturday and Sunday when our aircraft were not required for CASEVAC, aircrew made good use of our aircraft transporting people around the Moor or offering them up for additional tasking required by the operations HQ. With this tasking complete, we then had to repeat Friday’s tasking recovering personnel and equipment from the many check points. We were busy with long days, but the flying and tasking was good.” 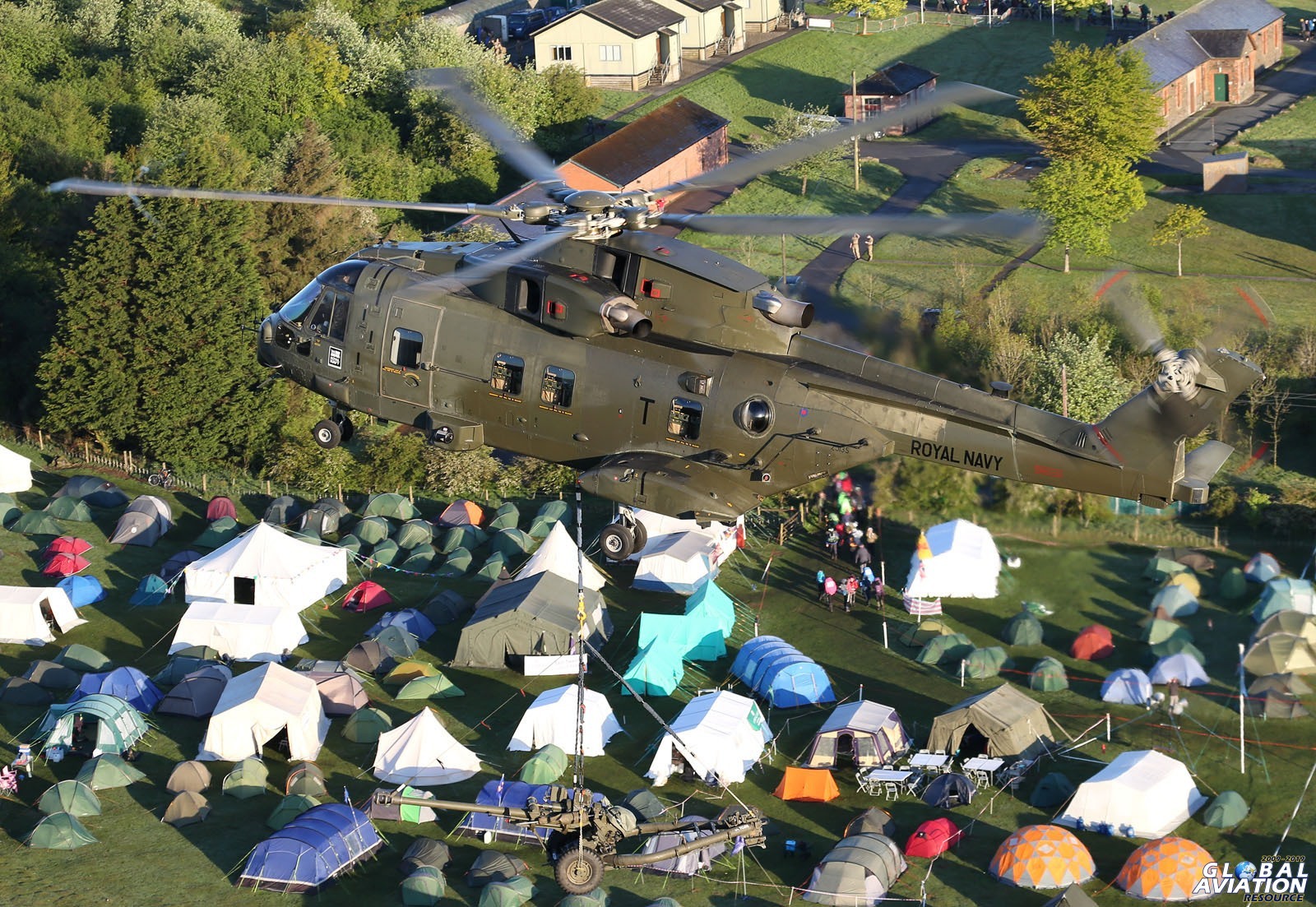 In addition to the two Merlin helicopters on station, Devon and Cornwall Police operated a drone at the event for the first time. This assisted with ‘find’ side of the events tasking; namely personnel recovery and search and rescue. Personnel we spoke with confirmed this additional capability had proven very useful with deconfliction procedures implemented to ensure 846s Merlin helicopters and this unmanned component could operate in close proximity safely.

There are few events taking place in the United Kingdom which match the scale, stature and spectacle of the Ten Tors event. Watching so many teenagers navigate unaided around some of the most testing terrain in the United Kingdom is truly inspiring as are the efforts made by the British Army, Royal Navy and so many other organisations to ensure this unique event can be staged. From an aviation perspective, 846 NAS confirmed their aircraft performed well and they were able to complete all the tasking required of them. The 2019 event was an excellent event although it was overshadowed by the sad loss of one of Dartmoor’s Search and Rescue team’s longest serving female members who collapsed on duty during the Sunday. Despite being airlifted quickly to Derriford Hospital, she passed away soon after arriving. Our thoughts and best wishes are naturally with her family and friends.