Military Aviation – “So, your new jet is called the Eagle?”

David Gledhill takes us back to 1979, when the RAF’s Germany-based F-4 Phantoms met the new kid on the block for the first time – the F-15A Eagle.

There we were, the Kings of the low flying areas policing the Inner German Border which divided the once belligerent German Nation. Our job in the RAF Germany fighter force was to protect the democratic West from the communist East in our McDonnell Douglas F-4 Phantom FGR2s flying from RAF Wildenrath on the Dutch border.

During a typical day over the North German Plain a pair of Phantoms would venture out at low level threading our way past towns and cities, skirting surface-to-air missile sites with their Nike Hercules and Hawk missiles pointing east until we crossed the mighty Rhine river. Once in the more open airspace and beyond onto the North German Plain, the “fight was on”. It was World War Three on a daily basis.

Light aircraft were mandated to stay above the mayhem but we could intercept any NATO aircraft flying down there with us and we could expect a fierce response. Opponents varied from Dutch F-5s, through German F-104 Starfighters to Fiat G91s. Most of these simulated foes when armed for a ground attack mission were limited in turn performance and a well flown Phantom was more than a match with each type being a close comparison to our potential adversaries across the border in the East. Air combat, normally flown at medium level, was where an opponent would respond aggressively and there was no restriction in either participant in the engagement, manoeuvring for a simulated kill.

Strictly speaking, what was authorised at low level was known as affiliation training giving a clearly delineated “fighter” and “target” with the Phantom being the “fighter” but at times what we did seemed remarkably close to air combat “in the weeds”. With its impressive war load of four AIM-7E Sparrows, four AIM-9G Sidewinders and the SUU-23 gun there was nothing to touch the mighty Phantom. All that was to change. 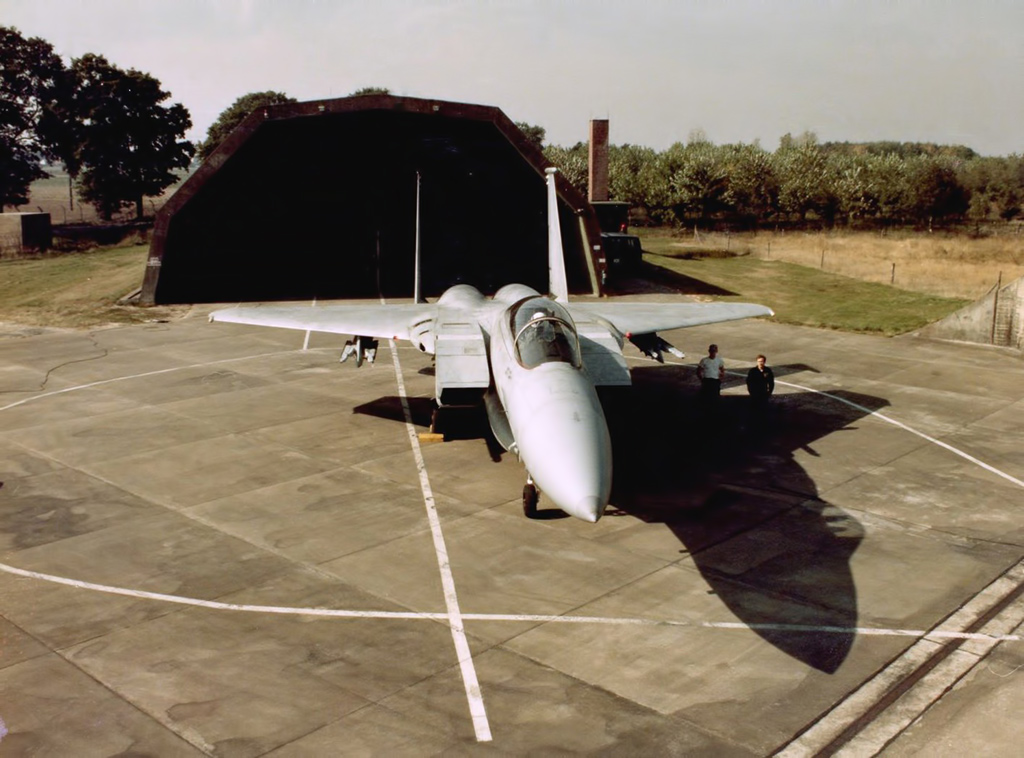 In late 1979 the Squadron Boss announced to an enthusiastic throng that we were to host a week long detachment by two F-15A Eagles. A pair of the new jets from the 525th Fighter Squadron from the airbase at Bitburg deployed to RAF Wildenrath for the first time, operating from the hardened aircraft shelters in our very own Delta Dispersal.

The flying scenarios built from one Phantom versus one Eagle, through two Phantoms versus one Eagle to full blown two versus two scenarios. It was to be a sobering experience, however, as the dominance of the FGR2 was to be challenged. With its pulse Doppler radar, the AIM-7F Sparrow with improved performance and a new integrated weapon system with a fully integrated head up display, the F-15A was a generational step forward in capability. Not only was it a thoroughly capable fighter but the three pilots and 12 groundcrew who detached to Wildenrath for the week kept the jet serviceable with seemingly minimal effort and a smattering of “black box” changes. It was rare for them to lose a sortie unlike our own experiences when we detached away from base. The two new shiny jets seemed formidable in comparison with our ageing, leaky warbirds.

The early sorties were predominantly air combat training in the medium level airspace overhead Gutersloh known as “the TRAs” which provided airspace barred from use by civilian air traffic allowing full air combat manoeuvring from 10,000 feet and above. After a climb out from Wildenrath, a 50 mile split saw us pointing at our new opponent for a radar intercept. Unlike the US Phantom with its simple pulse radar, the new longer range pulse-Doppler equipment in the Eagle seemed invincible. We had yet to understand the utility of the new track-while-scan function which allowed them to track us giving full information yet remaining in search mode giving little warning of their interest.

That the immense power of the new radar acted like a full blown electronic jammer against our own radar added insult to injury. Immediately on turn-in the opponents would be calling contacts on the radar and “sorting” their targets – us – for individual attack. With the unintended jamming our own radar contact came perilously late in the engagement, the scope cluttered with electronic noise. This left little time to assimilate the tactical picture. The improved range of the AIM-7F Sparrow left us trading shots at a disadvantage some miles after the F-15A had already launched. Once visual, unless the Phantom could engineer a tactical disengagement the merge would rapidly deteriorate into an early kill with an Eagle firmly slotted into our 6 o’clock. Even using vertical manoeuvring which had stood Phantom crews in good stead for years was ineffective. Distressingly, the Eagle was even more powerful than the Phantom and negated the advantage. Only cunning tactics (clearly as cunning as a fox) or the hope that we could engineer an unseen entry to the merge saved a little face. The Eagle had landed! 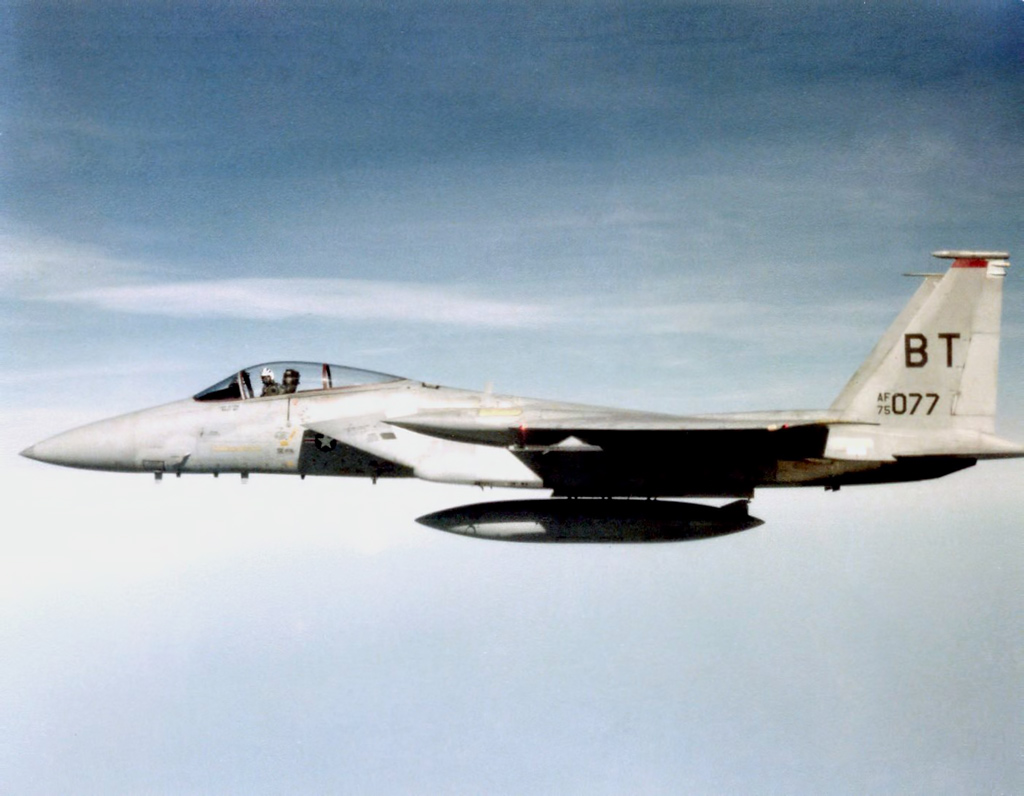 The Squadron Commander was, subsequently, to announce that despite the obvious abilities of the new aircraft, Phantom crews were able to claim kills on the more agile opponent. It was a rather vain hope and only the capacity of the pilot to manage the cockpit workload seemed to be a bar to air superiority.

There was still one huge advantage which Phantom crews were able to exploit. Only when we persuaded the Eagle pilots to come down from medium level and operate at 250 feet above the ground did the balance return to something more of an even playing field. The advantage a Phantom pilot held was that he had a navigator to manipulate the old analogue radar system and its complex controls. Doing so was a full time job requiring attention inside the cockpit, clearly not advisable when close to the ground at high speed juggling with stick and throttle. The Phantom pilot could devote his whole attention to matters outside the cockpit unlike the Eagle pilot. 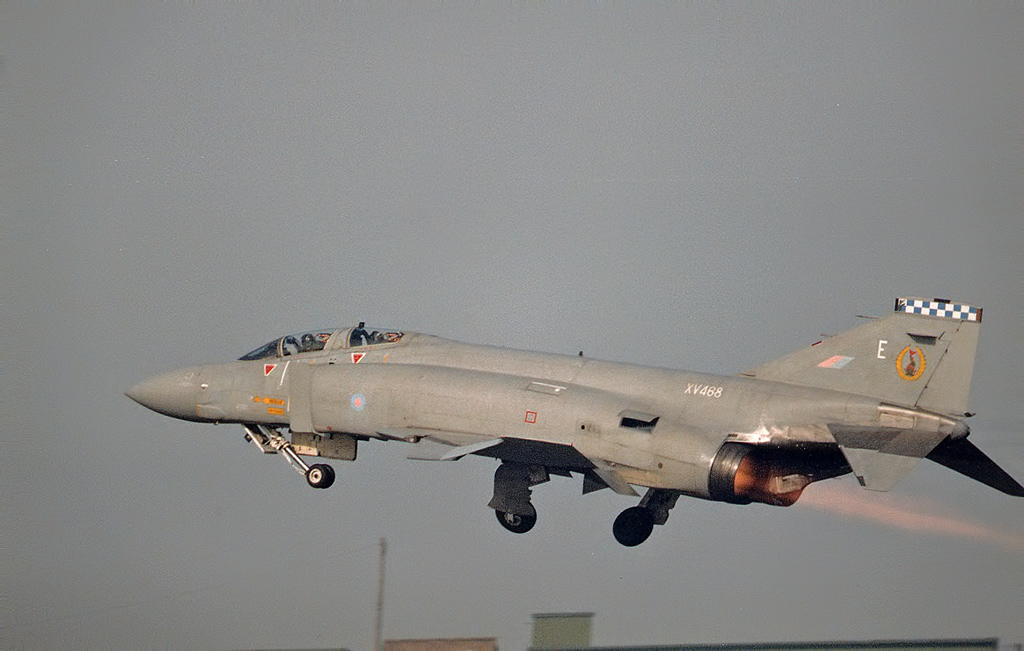 Although a massive improvement in the man-machine interface had taken place, the early F-15 still required much manipulation unlike its modern siblings the F-15C and E. Only by taxing the Eagle pilot to the extreme by dragging him “into the weeds” and then by exploiting the still capable AN/AWG 12 radar and Sparrow combination could the Phantom compete. Later, with the advent of the all aspect AIM-9L Sidewinder which increased the combat missile engagement zones enormously in the head sector, could the Phantom once again demonstrate its prowess. One thing was a positive for Phantom crews. The Eagle was huge. Once it racked into a turn, the massive plan-form was as big as a barn door and keeping sight within a two man crew was rarely a problem.

During a brief opportunity to work alongside the Eagles rather than against them, and pitted against a large formation of Jaguars from RAF Brüggen, did the true potential of the Eagle/Phantom pairing become evident. Although the early AN/APG 63 radar suffered from noise and false targets at low level, the hugely improved visibility from the bubble canopy, the superb man/machine interface with hands-on-throttle-and-stick controls, coupled with the impressive turning performance made the Eagle a formidable ally at any height. 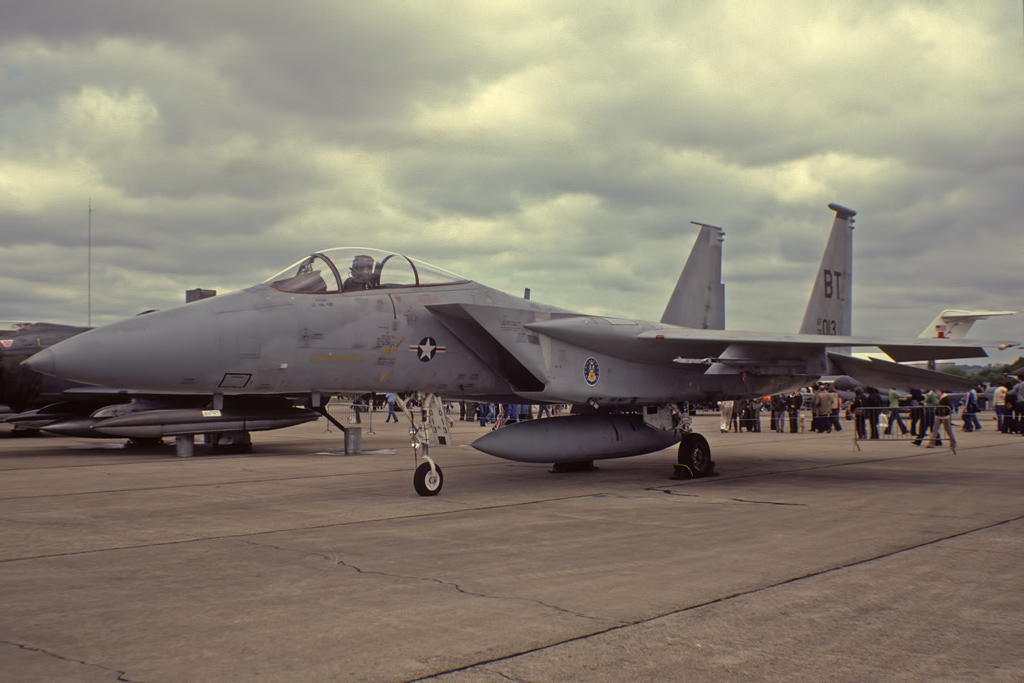 Working with the Americans could be frustrating due to their security regulations. At times it felt as if we were part of the Warsaw Pact such was the secrecy surrounding the capabilities of the new radar and missile combinations. With the advent of a “shoot cue” which gave the pilot literally a prompt in the head up display to release a weapon, in cockpit “mental gymnastics” became an anachronism. Unfortunately, this all had to be taken on trust as the new system was so secret that they were not allowed to share either radar or gunsight film with us. A reassurance that “the kill was validated, Sir” sometimes rang hollow given an apparently massive expansion of the kill envelope. Only later were we to have the facts proven when the Eagle was put to the test in live operations. At the time I admit to a healthy dose of scepticism.

American pilots don’t drink. That was the mantra. They have a small “half” and are in bed by 9. So went the story. The pilots from Bitburg certainly disguised the stereotype well. Not only did they (nearly) match us in capacity but they arrived with an impressive party trick. Anyone who has ever tried to crush in the mouth and then swallow a whole hens egg knows the challenge. To devour the shell and all takes application of the highest order. To process the result the following day takes fortitude to an entirely different level. Air combat became an even greater challenge!

Although we would never face the Eagle as an opponent, the emergence of the Soviet “RAM K” and RAM L” designs which would eventually be known as the Fulcrum and the Flanker, were the warning of challenges to come. These threats would prompt the requirement for an air superiority fighter which would only be addressed with the introduction of the Typhoon in the “naughties”. It was the wake up call that, in order to survive, the Phantom would need upgrades. The British dallied and, eventually, chose to retire the type in 1992 as a “Cold War windfall”, yet the Germans adopted the AN/APG-65 radar, AMRAAM and AIM-9L which, coupled with the manoeuvre slats configuration, extended the capability until 2013.

Cold War exercises and detachments such as these were designed to hone the air combat skills of NATO squadrons and crews to a peak. We had no doubt of our superiority over our Soviet opponents and, given their vast superiority in numbers, relied on that capability edge. I was proud to have served with my US colleagues in Germany and I went on to count a number of “Eagle Drivers” as true friends during subsequent tours of duty in America. Sadly, I never realised my ambition to fly in an F-15 but I can safely say that the bonds forged during these mutual exercises would have given NATO a significant edge in any conflict had we been called upon.

If you would like to read more about flying operations over West Germany during the Cold War and, specifically the Phantom’s role, the topic is covered in David’s book “Phantom In Focus – A Navigator’s Eye on Britain’s Cold War Warrior” published by Fonthill Media. His new book “Phantom In The Cold War, RAF Wildenrath 1977 to 1992”, published by Pen and Sword will be released in early 2017.

If you enjoy aviation fiction, two of his novels, “Defector” and “Provocation” in the “Phantom Air Combat” series are set at RAF Wildenrath during the Cold War and available on Amazon Kindle and in paperback.

For more info, and much more, visit David’s own website.

GAR would like to thank David and also Terry Senior, for use of his images.