Construction of the fourth Nimitz class carrier started in 1981 and she was commissioned in October 1986. Since then she has been homeported at Naval Station Norfolk, Virginia, and this is her eleventh deployment. Her one and only previous visit to the UK was in April 2009, with Carrier Air Wing 8 (CVW-8) embarked, on her way back to Norfolk at the end of her previous deployment.

Between August 2009 and August 2013 she was alongside in Newport News Shipyard for an extended Refuelling and Complex Overhaul (RCOH). On March 11 2015 she departed from Norfolk for a lengthy deployment and a homeport change to San Diego, California. She is going the long way round to San Diego, and will be stopping off in the Middle East for a period of time, to take part in Operation Inherent Resolve.

Most of Roosevelt’s aircraft are ranged on deck © Mark Hawthorn – globalaviationresource.com

Accompanying the Roosevelt and making up Carrier Strike Group 12 are the guided-missile cruiser USS Normandy (CG 60), the guided-missile destroyers USS Winston S. Churchill (DDG 81), USS Forrest Sherman (DDG 98) and USS Farragut (DDG 99). The Winston S. Churchill accompanied the Roosevelt to the UK and was alongside in Portsmouth Naval Base, whilst the others were mostly carrying out port visits in other parts of Europe.

Embarked on the Roosevelt for this deployment is Carrier Air Wing 1 (CVW-1), comprising the following squadrons:

One of VAQ-137s Growlers can be seen in the left of this shot © Andy Marden – globalaviationresource.com

Every type embarked is visible in this shot © Mark Hawthorn – globalaviationresource.com

VRC-40 ‘Rawhides’, Detachment 1 from NAS Norfolk with a pair of C-2A Greyhounds. These were not onboard whilst she was at Stokes Bay.

Prior to the ship’s arrival, the C-2s put in appearances at several UK airfields, including RAF Lakenheath © Matt Clements – globalaviationresource.com

This is the Roosevelt’s first deployment with the EA-18G and also the first operational deployment of the E-2D version of the Hawkeye. The E-2D received it’s Initial Operating Capability (IOC) in October 2014, and VAW-125 are the first squadron to be equipped with it.

HSM-46 ‘Grandmasters’ from NAS Mayport, Florida, with the MH-60R version of the Seahawk, were also embarked as part of CVW-1 on the other ships of the Strike Group, with the Winston S. Churchill having one aircraft onboard when she docked in Portsmouth.

The Roosevelt departed from UK waters during the afternoon of 27 March, continuing her long journey eastwards. It will be a long time before her crew gets to see their home turf again; we wish them safe travels.

The author would like to thank Mark Hawthorn, Andy Marden and Matt Clements for the use of their photographs. 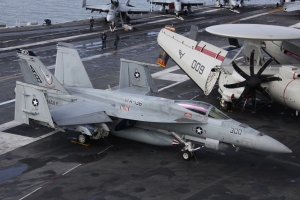