Paul Filmer continues his retrospective series with a look at RAF Manston, Kent, from 1980 to 1982.

RAF Manston was somewhere we didn’t often venture to, as the residents rarely changed, plus the schlep to the end of Kent was a long way, and almost impossible via public transport. So I came to this airfield late via car.

Manston was the home to the Air Ministry Fire Training School and the RAF Fire Fighting and Rescue Squadron along with RAF Catterick in North Yorkshire, and here old surplus military aircraft came to die a fiery death.

My first visit in 1980 found a smattering of old military aircraft still extant.

Argosy E.1 XN855 from 115 Squadron was still complete at the time of my visit, having arrived in 1977. The airframe met her end in 1992 when she was blown apart by explosives and then burned.

Bulldog T.1 XX530 was last with the RAF’s Bulldog Aerobatic Team, and is seen here on the grass upside down. The aircraft was involved in a forced landing after an engine failure in North Yorkshire on 21 September 1978, and came to rest in a dead stop in peat. Unfortunately both crew died. Another Bulldog, XX637 was marked as XX530 as a tribute and was last known at ATC Glasgow.

Three Devon C.2s are pictured here, with the nearest being VP960.

Lightning F.3 8188M/XG327 had a busy trials life. It was used as a crash barrier trials aircraft from 1959-1962 and a weapon and systems trial aircraft until 1967, and afterwards was utilised for supersonic noise tests, until stored at Bedford in 1971. After a period at St. Athan where she gained the maintenance number shown, she was shipped to RAF Manston to be used for brake fire training. She is seen here still in a relatively good condition, but by 1991 she had burnt to a crisp.

A couple of Victor K.1A aircraft in different states of demise next. XH590 wearing 55 Squadron markings, seen here as yet unburnt, was sent here in 1975 and eventually scrapped in 1993.

XH560 of 214 Squadron was well on the way to being a burnt hulk when I took this shot.

101 Squadron Vulcan B.2 XL386 is seen here in good shape, but unfortunately never escaped being scrapped in 1994.

Invicta Britannia G-ANCF is now in Liverpool after being moved from the Brooklands Museum as part of a restoration project.

Another Invicta Britannia G-AOVF is now on display at the RAF Museum at Cosford as XM497, although she is not the real XM497, as that was broken up at Stansted as Young Cargo OO-YCF.

CL-44-6 Yukon 9Q-CWK, as the type suggests, was originally with the Royal Canadian Air Force until 1973 when it was sold to Societe Generale d’Alimentation as 9Q-CWK. In 1977 she changed ownership to Transports et Manutenbtions Commerciaux (or TRAMACO), keeping the same registration, and was operated until 1980 when she was stored as seen here at Manston. The following year she was flown to Kinshasa, Zaire. for Katale Air Transport to be stored, and was eventually broken up in 1983.

Saudi Arabian Airlines F-27J N746L was being leased from the USA and I think this was on her return journey back to the USA after the lease. The airframe is currently on display as CC-CBS at Los Cerillos, Chile.

That concludes 1980 with my only other visit being in September 1982 to see the Greenlandair DC-6B. OY-DRM was re-registered as G-SIXA for Air Atlantique, who bought her for spares for sister-ship G-SIXB. She never moved from Manston and was eventually broken up in 1985.

Also present was C-119G 3C-ABA which was ex-Belgian Air Force CP-9/OT-CAI. After a long period of storage at Koksijde she was restored to airworthy condition and registered to BATA Internation of Equatorial Guinea (3C-ABA), but never made it to Africa and instead was flown to Manston where she was stored until re-registered as G-BLSW with Aces High. It was ferried to North Weald, now carrying both N2700 and G-BLSW registrations, and stored for a further period of time. In 1994 the airframe was eventually scrapped on site. This is the only C-119 that’s ever appeared on the British register.

Another interesting UK airfield that I should have visited a little more; isn’t that always the way? 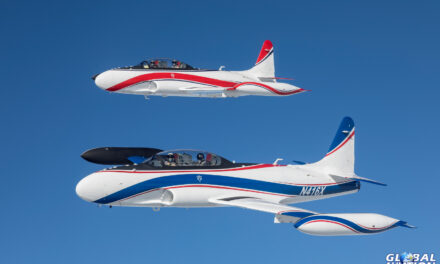